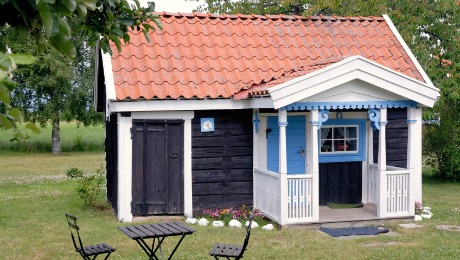 As any homeowner can tell you, having a “Home Sweet Home” of your own is great. However, the ongoing financial and maintenance responsibilities are never ending. It’s a no-brainer to understand that the larger the home the more time and money it takes to keep everything in order. No surprise then, that scores of Americans are taking up the tiny home movement. Oh yes! The interest in diminutive dwellings has been officially identified as a “movement.”

According to the National Association of Home Builders, American homes averaged 983 square feet in 1950. In the years between 1978 and 2007 the average square footage of U.S. homes grew from 1,780 to 2,479. This happened in spite of the trend to have smaller families. Since around 2009, there has been a surge in those interested in houses that are 1,000 square feet or less. Author Sarah Susanka’s book, The Not So Big House, has been credited with helping to spread the word about the positive quality of life a smaller home can offer. Itsy bitsy residences are not such big news in much of the world, including Germany, Asia, Spain and England, where they have been around for ages.

In the U.S., three groups of potential tiny home buyers appear to be driving this trend.

Baby Boomers who are tired of mowing grass, cleaning bathrooms, and washing windows appear eager to jump on the tiny housing bandwagon. This crowd is ready for some serious R&R as they look towards retirement. Paring down from a 2500+ executive estate to an elfin retreat is very enticing!

The next group to embrace micro-housing are those who experienced tough times during the housing boom and bust. They may have faced foreclosure or narrowly missed it, so a small, affordable place is quite appealing to them.

Finally, the eco-minded Millennials have embraced this concept as well. And why not? These kids of the Baby Boomers likely watched their “house poor” parents struggle and they want to avoid repeating that struggle as best they can.

Google reports that searches for the term, “tiny house” have been surging in recent months. The online marketplace, “Tiny House Listings” has noted there’s been an explosion of activity since 2011 and this July, their Facebook page went from 182,000 likes to 5,500 in the span of one week! The A&E Network heard the buzz and has begun airing a new show, “Tiny House Nation.”

It is no small wonder that so many folks are intrigued with this idea, which epitomizes the mantra, “Less is more.” And how! Tiny home dwellers often say they are happier without so much stuff that only prevented them from doing what they enjoyed in the first place. When you are living in 1,000 square feet or less, be assured that there is only room for what you either really need or really love.

Clever design ideas and tricks similar to those used on boats and in campers is one way tiny houses allow their owners to live big. One owner of a 650-square foot oceanfront mini-cottage wanted to open up the view from the bedroom through the bathroom to the kitchen and living area. So she installed a two-way mirror between the bathroom and kitchen. Now, the oceanfront view is enjoyed all the way through! Drop down tables, Murphy beds, lofts, built-in cabinets and bureaus, recessed lighting, and numerous eco-friendly components serve to maximize these small spaces and amp up their affordability. Because many of these cottage-like homes average around 600 square feet, it is possible to splurge on very high end building materials, fixtures and furnishings since you’ve only got a fraction of usual square footage to worry about.

There is also a sub trend within the movement, known as “micro-housing”. Believe it or not, they are homes with less than 500 square feet. Many are on wheels and easy to move from place to place. Another consideration is that some communities have size requirements, which is why it’s good to be able to pull up stakes and move if necessary.

Bloomberg News contributor, Nina Glinski covered this topic recently and interviewed 36-year old Aldo Lavaggi, who is a folk musician living in a 105-square foot home in the Berkshires, a very pricey spot in New York’s Hudson Valley. He explained that he and a friend built the home and it runs on a car battery and two solar panels. From the money he saves on a big mortgage, he is able to enjoy the good life and spring for items like artisanal bread and gourmet cheeses. He told Glinski, “There’s a fallacy of limited options – I’m earning more than I spend.”

Another micro homeowner in the story was Doug Immel, a 57-year old teacher living in his 164 square foot place in Providence, RI. Since it was only $28,000 to build, Immel says he lives quite comfortably on just over $40,000 a year and affirms that the micro-house has given him, “complete peace of mind.”

See a few micro-homes here, in this abcnews story from Diane Sawyer: http://abcnews.go.com/WNT/video/micro-houses-big-trend-housing-23818843